CanopyLAB Unrooted: On being a female entrepreneur, taking risks, and embracing your own fears 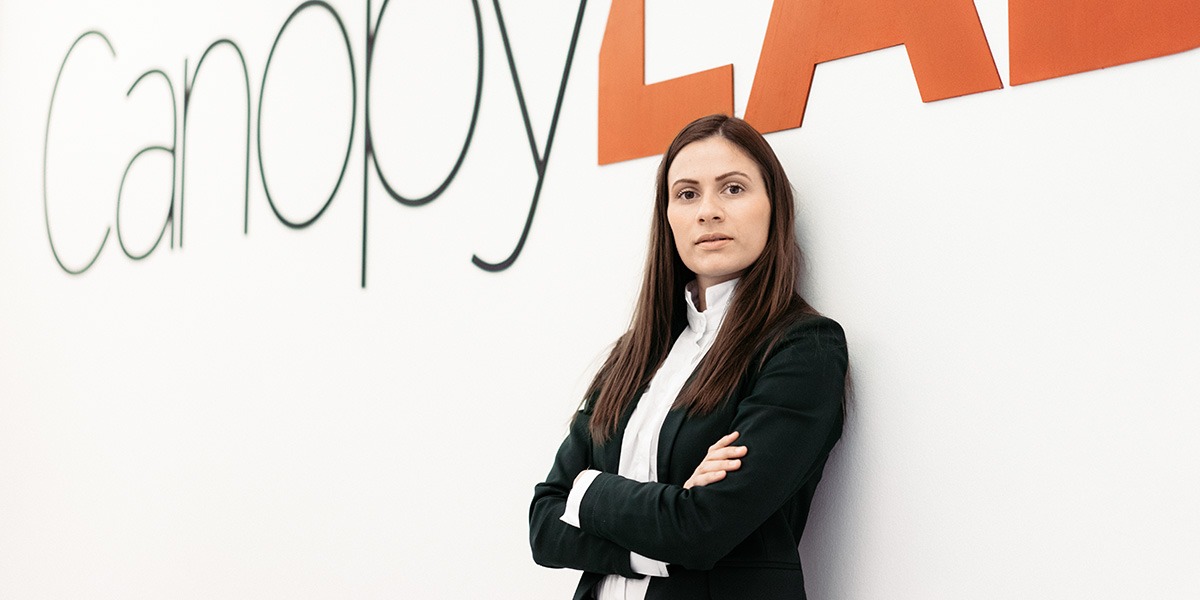 Earlier this month, we shared the first article in the series CanopyLAB Unrooted, an interview series with CanopyLAB co-founder and CEO Sahra-Josephine Hjorth, facilitated by Kim Lindgaard Jørgensen. Sahra-Josephine is passionate about being a female entrepreneur, and talks about topics such as funding, scaling a team, and having a baby while running a startup. She is also not afraid of discussing the challenges associated with running her own company.

KJH: How did your journey as an entrepreneur begin?

SJH: Growing up, I wanted to become a diplomat. I was very inspired by the idea of living in different places, urging people to get along, and solve problems in a constructive and nonviolent manner. But after I dabbled with diplomacy and lived in Russia, I knew wholeheartedly that that wasn’t a life for me. After that, I suppose I had a bit of a career crisis. But I never imagined that what I’d end up doing was to built my own startup. I never really saw that as my future, because I’m not a risk taker and because I’ve seen first hand what happens when your friends and family lose everything they own. So when we started CanopyLAB it was not because I dreamt of becoming an entrepreneur. Quite the opposite. But I felt really strongly about solving a problem that upset me.

While there are many new and interesting ways to learn online, I think learning platforms, such as Khan Academy, Udemy, Coursera, and Udacity primarily appeal to people who have already learnt how to learn through going to school.

KLJ: What is that problem?

SJH: The primary problem is that not enough people have access to education — and certainly not education of high quality. Many organisations are attempting to solve that multilayered problem in a series of different ways. And the Internet and increasing Internet access plays an important role in that. But a secondary problem is the lack of high-quality content online and inclusive learning environments.While there are many new and interesting ways to learn online, I think learning platforms, such as Khan Academy, Udemy, Coursera, and Udacity primarily appeal to people who have already learnt how to learn through going to school.Some people thrive in a self-paced learning environment where you don’t have a tutor or even a classmate. I have a PhD, and I’ve spent years learning how to learn alone. But most people haven’t. I still don’t find learning alone very interesting. Now, imagine people with very limited exposure to the school system. I think it is naive to think that simply giving them access to a computer and YouTube will result in them being able to gain new skills and ultimately get a job — or rather their dream job. We can do better.

I felt quite passionate about creating a better and more inclusive way of learning — a different learning experience that doesn’t just appeal to learners who already have a strong academic foundation.

KJH: You’ve been running CanopyLAB for almost two years now. Could you tell me what it’s like being an entrepreneur?

SJH: Being an entrepreneur is surprising in many ways. It requires very different skills depending on what phase the startup is in or the situation you’re currently facing — whether that is negotiating with a client, taking a new product to market, or expanding your team. One of the things I personally struggle with is to constantly remind myself that it’s okay that life is uncertain at times— life as an entrepreneur both includes big losses and big wins. While it is easy to love the wins, I’m learning to deal with the losses, too. And while I won’t say I love them, I’ve come to realize that it’s an important part of the learning process, and something we can actively use as a motivation to improve ourselves and our business. I want to share an example. Recently, we’ve been granted funding from the Danish Innovation Fund. But prior to receiving the money, we’d unsuccessfully applied twice. Of course, this wasn’t easy, but we learned a lot from it, and we chose to use it as a motivation to improve the application and show that we deserved to get the funding. And that persistence paid off.

As the company grows I’ve also become more confident in our idea and our ability to execute on the idea. We’ve been through the proof of concept and proof of traction phases already but we still have a long way to go. As the CEO, I also find it important to confront my fear of uncertainty whenever we are faced with a big decision. Sometimes I embrace risk, like when we recently took on a very large office because I believe in our growth. I am also aware that I am very conservative with our spending, which our investors challenge me on sometimes. You could say that being an entrepreneur is a job that requires a great amount of self awareness.

KLJ: What keeps you up at night?

SJH: Today, it’s very popular to be an entrepreneur and there are these personas that we have built up in the media, who are supposed to represent what entrepreneurs are like. They are usually young, often male, work way too much, and never have the time to see their friends. But they are wildly successful in terms of their financial gain. I often find these personas very stereotypical and misleading. Because we are all hungry for success stories to justify the risks we are taking, it’s almost forbidden to talk about what is hard about being an entrepreneur and some of the fears we have. That is very silly to me. We have to talk about our fears in order to learn from one another.

Nowadays, the things I’m worried about are different from the things that worried me when we were at the proof of idea phase. As we have grown to 10+ staff, I have a huge amount of respect for people who have entrusted their careers and livelihoods in me. People who have families, houses, student debts, and mortgages. Unlike many startups, we have a fairly high average staff age of 31,4 years. People have adult responsibilities and have given up other successful careers to be here. They don’t live on a couch. They are not going to just eat pasta for a year. And no, they don’t want to work 80 hours every week. To be honest, most people don’t want to work that much. I don’t want to. But one of the distinct advantages of having an experienced workforce is that our collective networks and experiences have played a key role in shaping our early success.

Something else that I am worried about is the lacking support of female entrepreneurs in Denmark.

Being a female Entrepreneur in Copenhagen

KJL: What specifically bothers you about the lacking support of female entrepreneurs in Copenhagen?

SJH: First and foremost, there are just not enough of us. As of 2016, out of 97 students at the Go Grow Programme — Copenhagen School of Entrepreneurship’s incubator — 97 were male, only 19 female. And this is a general picture. Secondly female entrepreneurs don’t get enough funding. I recently read an article about how 9 out of 10 Danish startups that are funded by venture capitalists have strictly male teams. Moreover, a 2014 Babson College report found that less than 3 percent of venture-capital-funded companies had female CEO’s. I don’t care what people’s opinions are about the distribution of men and women on Board of Directors, in startups, and others sectors, ultimately it is statistically impossible that teams composed only of men are better than teams with women in 9 out of 10 cases.

As a female entrepreneur and CEO, I feel that people are often afraid of commenting on the importance of gender equality. I believe in having both genders represented equally across all industries, regardless of that having become an unpopular opinion.

I am not afraid of highlighting some of the situations in which I feel more vulnerable or at a disadvantage because I am a woman. When we raised our first round of financing, we were lucky to attract a group of amazing angels, many of which had known me while I was pregnant with my son Elliott. But when we talked to VC’s, I never mentioned that I have a child. I’ve just seen too many articles and studies on how having children negatively impacts your ability to get funded. And I know for a fact that being pregnant has been the topic of conversation among investors and incubator programs we applied for — because they have told us that once they realized that not every woman stops caring about her career or startup simply because she becomes a mother.

Moving forward, as much as I prioritize growing CanopyLAB first, I’m also looking forward to talk more and honestly about what it is like to be a female entrepreneur.

This website uses cookies to improve your experience while you navigate through the website. Out of these, the cookies that are categorized as necessary are stored on your browser as they are essential for the working of basic functionalities of the website. We also use third-party cookies that help us analyze and understand how you use this website. These cookies will be stored in your browser only with your consent. You also have the option to opt-out of these cookies. But opting out of some of these cookies may affect your browsing experience.
Necessary Always Enabled
Necessary cookies are absolutely essential for the website to function properly. These cookies ensure basic functionalities and security features of the website, anonymously.
Functional
Functional cookies help to perform certain functionalities like sharing the content of the website on social media platforms, collect feedbacks, and other third-party features.
Performance
Performance cookies are used to understand and analyze the key performance indexes of the website which helps in delivering a better user experience for the visitors.
Analytics
Analytical cookies are used to understand how visitors interact with the website. These cookies help provide information on metrics the number of visitors, bounce rate, traffic source, etc.
Advertisement
Advertisement cookies are used to provide visitors with relevant ads and marketing campaigns. These cookies track visitors across websites and collect information to provide customized ads.
Others
Other uncategorized cookies are those that are being analyzed and have not been classified into a category as yet.
SAVE & ACCEPT
Menu